While artist-in-residence on the Galápagos Islands, Coates approached the family-run local television station, Channel 9 TV Galápagos. He offered to make a short news report for them as an outsider. His report was broadcast as a news item, appearing between coverage of a beauty contest and the football results. Dressed in his hand-made cardboard costume, Coates reports on the human society (population approx. 30,000) from the perspective of a blue-footed booby, an iconic bird of the Galápagos. Coates had asked research scientists working on the island what they would report about the human situation if they were a visiting bird. Much of the report is informed by their responses. 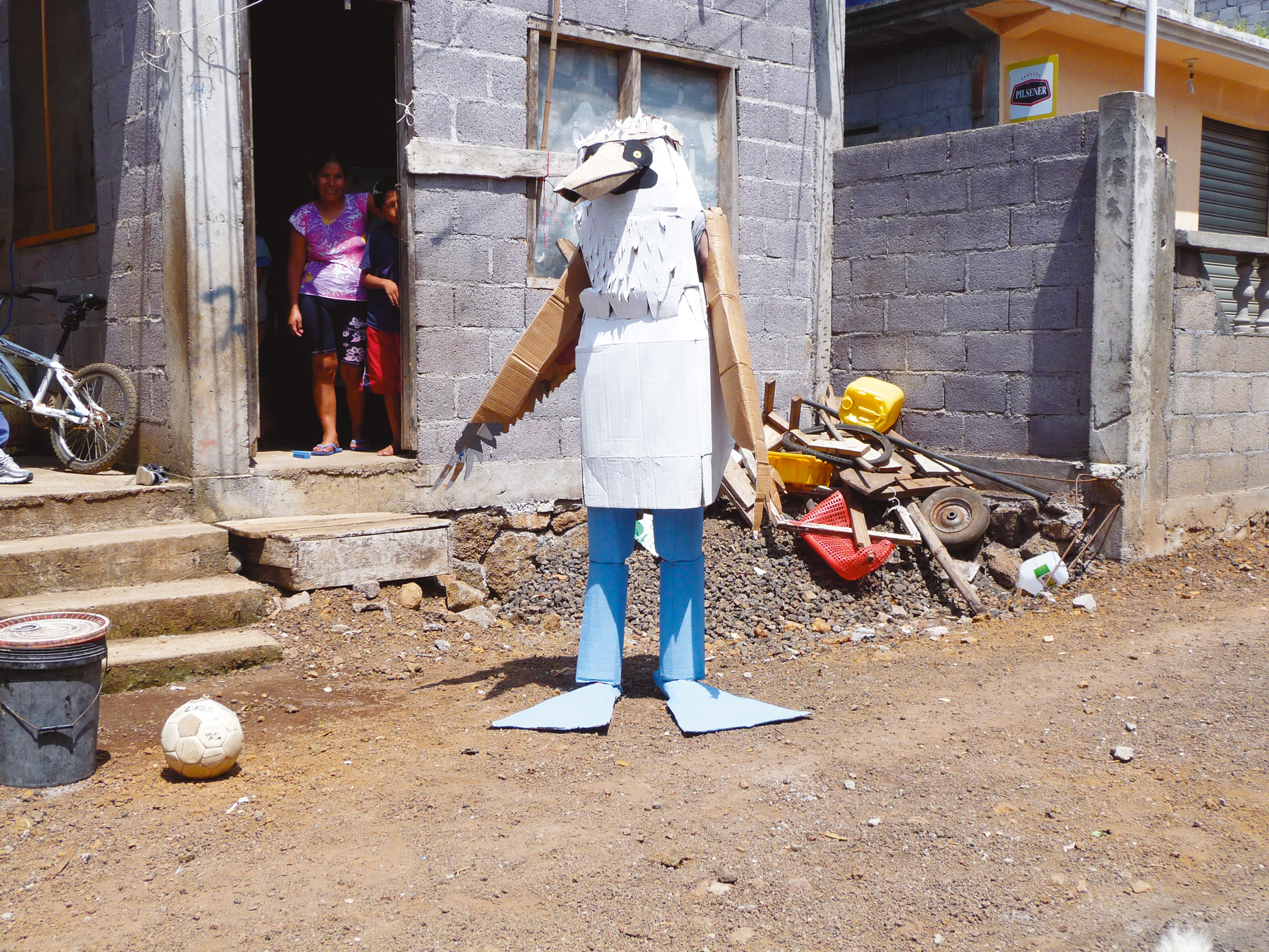 [The news presenter on Galapagos TV introduces a report made by Coates as a blue-footed booby, a well known bird of the Islands]

Now for an important news item.

The blue-footed booby is one of Galápagos’s best-known inhabitants. A unusual example of the species is currently visiting the islands, with the aim of teaching us a little more about how we human beings live.

Marcus Coates: Let’s get one thing clear. Our name is ‘booby’ which in Spanish means stupid. In English it means a woman’s breast. You are calling me a stupid tit. We’re superior to you in our flight – of course, but also when we’re swimming, diving, dancing and courting, to name but a few.

You are strange, comical creatures, with beautiful  markings. Why are some of you treated differently from others? Are you categorised according to your plumage? Do some of you form a different species?  Some of you have more territory than others? Why is that? Is it because some of you are bigger than others?

We are honoured with your symbol of a flying bird. Sunken tail, wings outstretched and beak pointing skywards. I think some of you don’t like being humans but you’re no good at anything else. If you were another animal you wouldn’t survive because you’ve lost your instincts.

People come to see us from far and wide. We’re famous. Why does no one come to these islands to see you?

Here are a few suggestions. Why do you feed your children with the spoon when you can regurgitate food for them? It’s easy for them to digest and there’s no washing up! You could also leave your shit lying around outside your homes to help keep intruders away. In conclusion, you are parasites. That’s easy for an animal like me to understand. But what I don’t understand is why you colonised these islands, which lack both water and supplies of food. Your survival isn’t assured, because you find it hard to adapt to local conditions. It’s a precarious kind of existence.

In any case, don’t worry. You are not in danger. I’ve seen many more like you in other places. If you all die, it’ll be OK. More humans will come and start up a new breeding colony.

Thank you for not eating me!

Presenter 2: Absolutely. It was brought to us by British artist Marcus Coates. The video and installation artist is visiting the islands and made this film to give us a perspective on how a blue-footed booby might comment on human behaviour.

Presenter 1: After the break we’ll return to our main news item. Maria Susana Rivadeneira along with one of the beauty queens taking part in yesterday’s… sorry tomorrow!

Presenter 1: Those beautiful women! They’re making me nervous. We’ll be talking to them very soon and enjoying their beauty and finding out what they think about Galápagos. We’ll be right back.

You are reading Human Report